The History Of Boundary Ranch 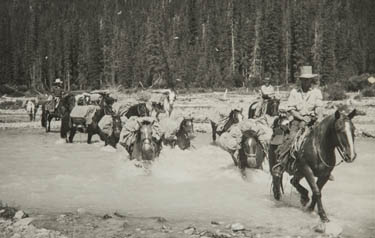 ‘Soapy’ registered the Rafter Six horse brand, which was placed on the horse’s right shoulder, in 1914. He maintained ownership of the brand until his death in 1948 and then the ownership resurfaced with Alvin Guinn in 1954. Alvin Guinn, who was raised in the Bow River valley and who worked for Brewster Tourism in Banff, was one of Soapy Smith’s primary ranch hands and served as a Rocky Mountain guide for pack horse trips from the 1920s to 1950s. He would later marry Eva Smith (née Coates), following the death of Soapy Smith. Alvin and Eva raised four children: Michael from her marriage with Soapy and their three children Shannon, Colleen, and Rick.

Rafter Six Ranch is as an important icon of the early development of cowboy tourism, and lure of the Canadian Rockies. The ranch’s association with legendary horseman and big game hunting guide, Alvin E. Guinn (1915-2006), who with Eva, capitalized on this development in the 1950s to 1970s. This period of growth marks the ranch’s “golden years” of development, and symbolizes the growing importance of tourism in the Rocky Mountains.

It was in the 1930’s that Guinn Outfitters began a rich legacy. Long before Kananaskis Country was recognized as a destination the Guinn family was riding and guiding the same trails used today.

The Guinn Legacy began when Alvin Guinn rounded up wild horses in what is now known as the Kananaskis Range of the Canadian Rocky Mountains.  He gathered the wild horses on the present day site of Boundary Ranch before taking them through the mountains to his home ranch in Seebe, Alberta. Today, the original corral still stands on the Boundary Ranch property. During hunting season, Alvin was the first Outfitter to take a pack string from Galatea up over the mountain to Ribbon Lake.  This route has officially been named “Guinn`s Pass” and is a popular hiking trail.

Boundary Ranch was established in 1987 as Kananaskis Country was in the early stage of development. The name Boundary Ranch was chosen because the location is on the boundary line between the previous Provincial Forestry area and the original Federal Forestry Experimental Station. The Guinn’s first summer of operation involved them living and managing the business from trapper tents and teepee’s and a small corral with only 15 horses. Still family operated, Boundary Ranch has grown and developed over the years, always with a hands on approach with emphasis on great western hospitality along with a strong connection to history and tradition. Today we have approximately 100 head of horses; a small herd of buffalo; one donkey, Iggy and one mule, Idget.

Boundary Ranch and Guinn Outfitters continue to welcome and share special wondrous places with guests from around the world now and for many years to come.

With over 85 years of experience in mountain horseback riding and guiding in the Canadian Rocky Mountains, we will ensure your valuable holiday time will be a safe, authentic and memorable experience for you to treasure forever.

We look forward to adding you to our history, with one of our adventures and your signature in our Guest Book!